Thank you! I will definitely try those out and see what works. I guess some slow plasma cannons could be an option...

I had no idea that Soviet bus stops were so varied! I imagined they would simply be grey cubes with rusty sheetmetal, but I guess that just because the government was how it was doesn't mean the people were that way! Artists and architects will always find an outlet. I like how the structures combine unique geometric shapes with a more local decorative style- very distinctive and expressive. Fascinating to see how such a mundane, everyday thing as a bus stop can be a work of art. Thank you for sharing!

I think that the bus stop designs could definitely carry over- that early Space Race aesthetic. It might be a nice touch to have the distinctive shapes and lines differentiating the Communist systems. I don't know if I have the modeling prowess to do so, but I will definitely try.
Top

Loved that you used an actual asteroid 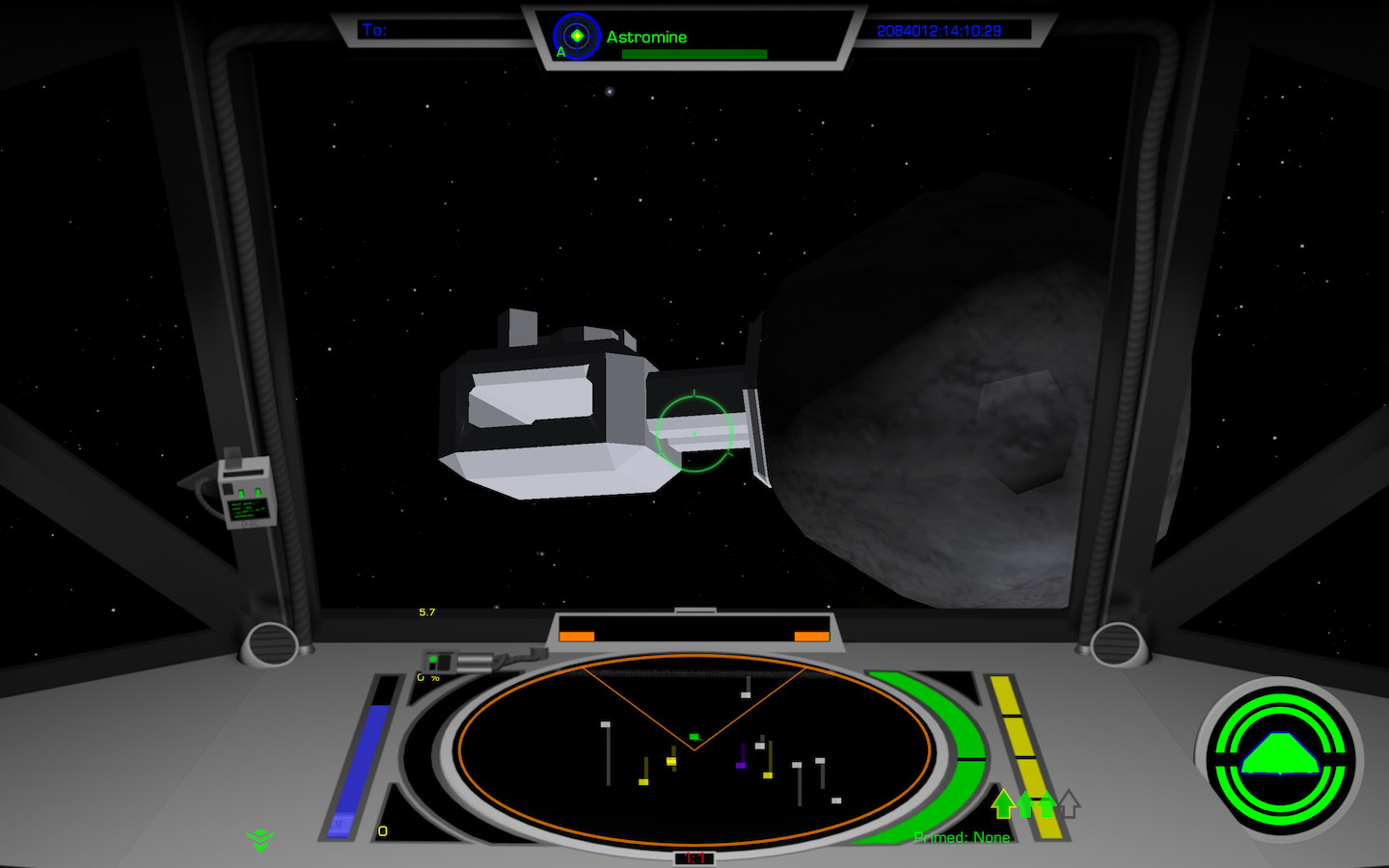 Quite Glossy for commies

Very cool. Note that shininess is not used in the current lighting model though.
Top

Ooh, I like that new paint job! Might be nice to stick some other colors in there alongside the typical Soviet green.

I agree, the gloss was way too high. I modified the texture to make the paint flat and put in the numbers you suggested. I also received the intensity of the normal map and corrected some issues so it doesn’t look quite as... chunky?
Top

for me it's clunkyness is part of it's charm

So, I got a little distracted and tried to make some new textures for the Commuter, but the UV map I originally made was not exactly easy to work with. Lines were crooked, nothing aligned, everything was a different size- the works. I straightened the UVs and pretty much remade the textures. The result looks slightly sharper and is much easier to work with. Now, the Commuter comes in three paint schemes: 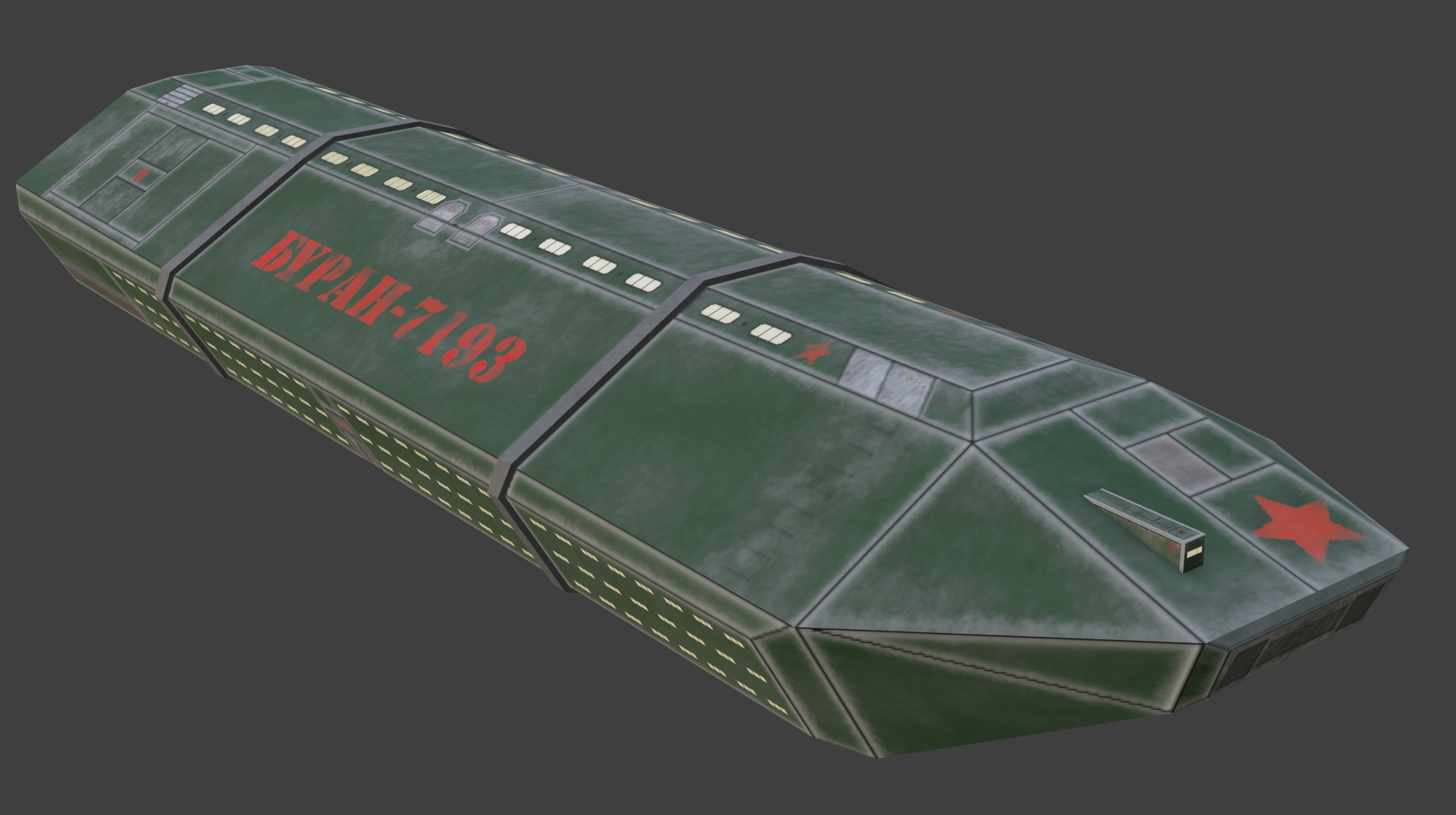 Hot off the State-Controlled Press 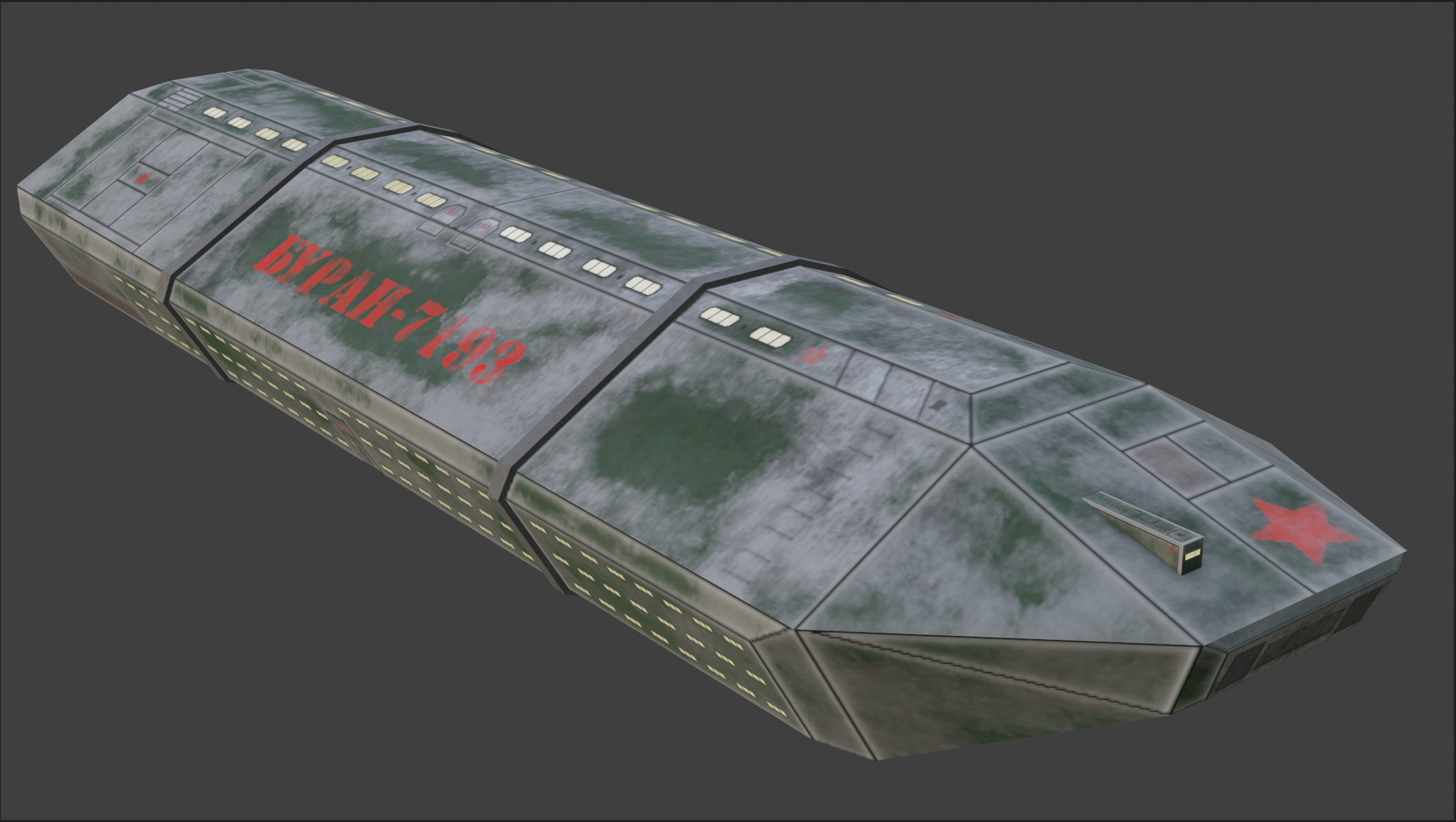 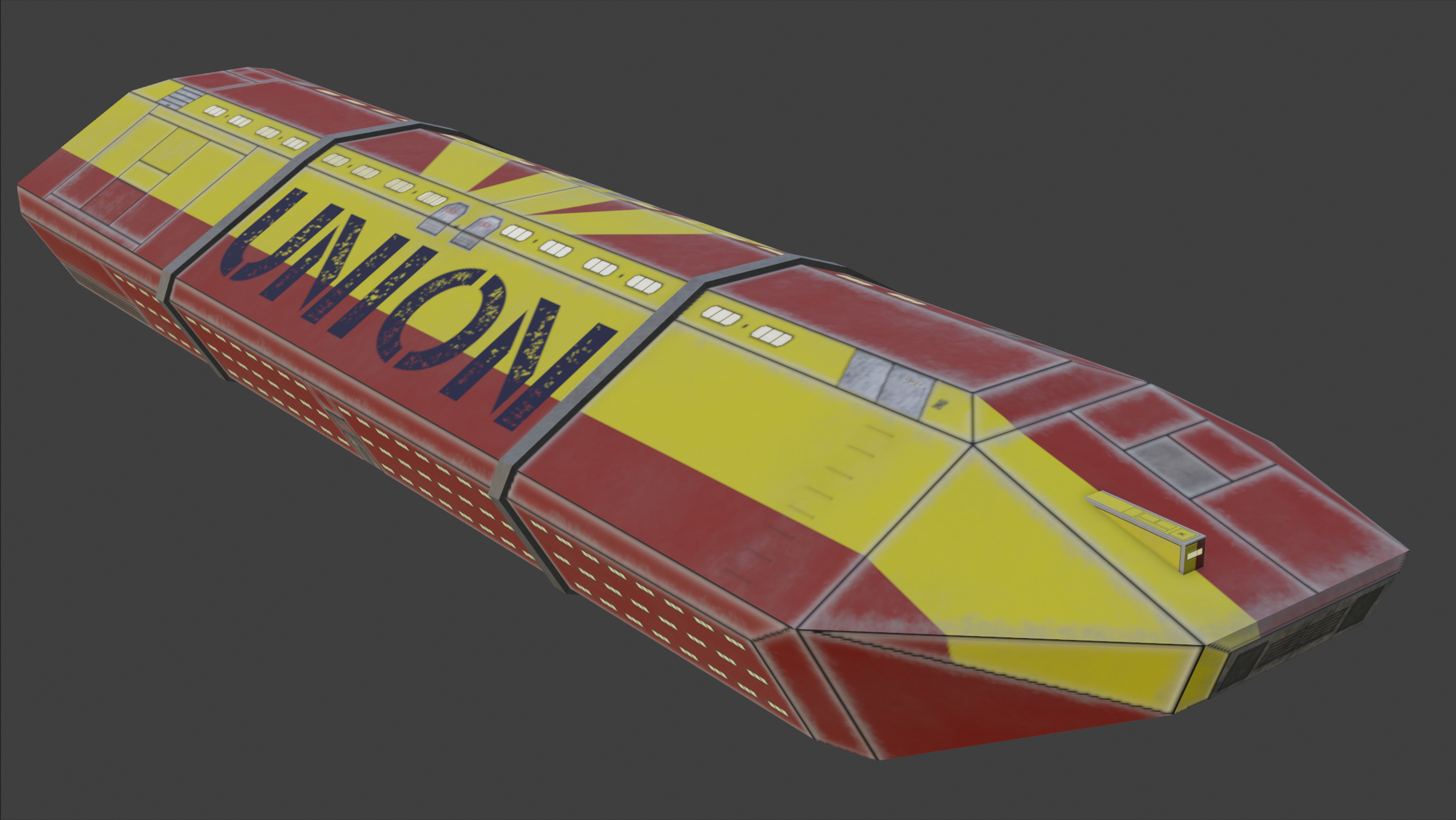 I applied these textures to the three different variants of commuters that spawn, but I have no idea what the difference is between them. Ah well.
Also, here is a zip file containing the GIMP and Blender files for the commuter, in case anyone else wants to make additional textures.

My personal 2-cents, it looks great. While I am not that much into the red/yellow version your 2 other textures are really eye-catchers.

Come the counter-revolution we'll convert them into caviar-carriers! I assume that one of them should be able to transport enough for a decent-sized banquet!
Denizen of the Dark and Dismal Deserts of Digebiti.

Cholmondely wrote: ↑
Sun Jul 26, 2020 2:04 pm
Come the counter-revolution we'll convert them into caviar-carriers! I assume that one of them should be able to transport enough for a decent-sized banquet!

I'm a fan of that idea!
The craft was designed around two angled-gravity passenger decks (poorly made cross-section below). Probably part of some unimplemented plan to have Communist main stations with docking rails to accommodate these craft, discouraging privately-owned transportation. It would be a simple matter to gut the rows and rows of stadium bleachers, add a little too much wood trim, and create a rather nice establishment. A quarter-kilometer long banquet or buffet table would be in order. 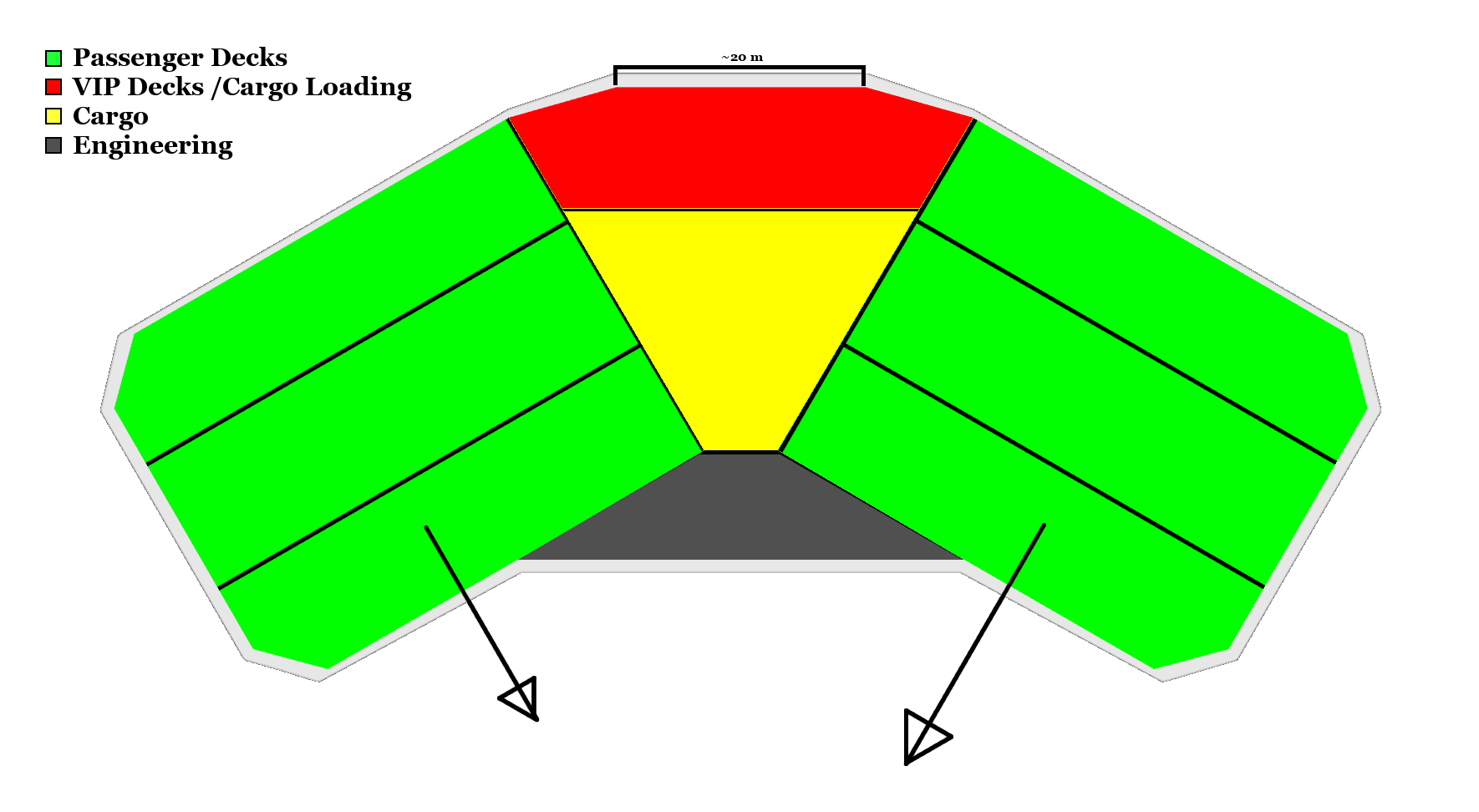 An interesting addition for some of the smaller, recently de-communized systems would be to have a stationary Commuter with a landing pad, a little city in the sky. Tall tales, fine dining, and questionable trading, all in one place. 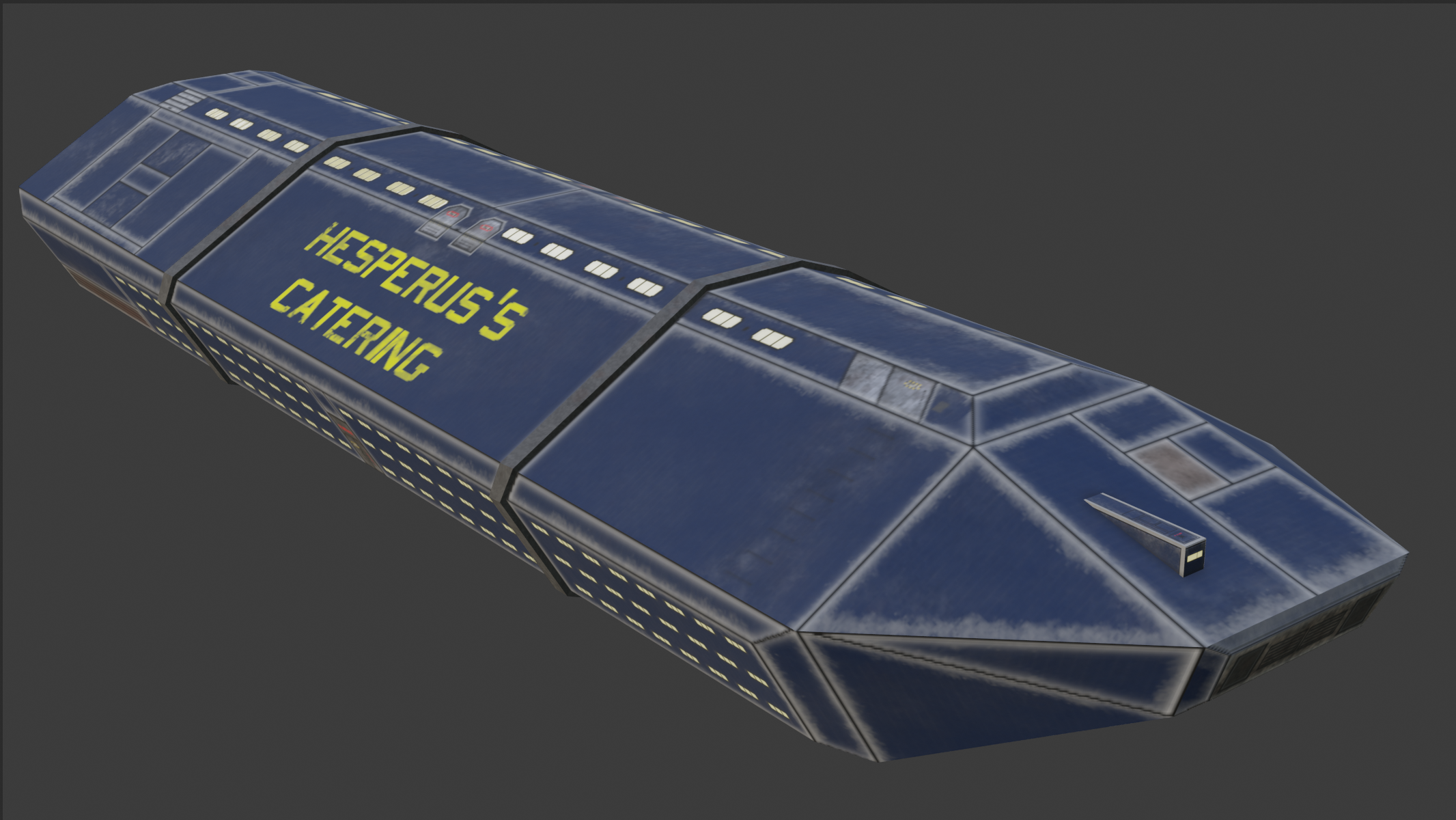 My dear chap, the assault on one's aesthetic sensibilities would be too extreme if we actually held our banquets in those bolshevist behemoths. As you doubtless have overlooked, the appropriate environment requires not just the cuisine and the appropriate beverages, but also consideration of such matters as the music played - and also the acoustic environment conducive to the enhancement of the experience.

Then there is the matter of the actual banqueting hall itself. At Digebiti, my cousin Digby (the Duke) rebuilt the Dynastic Dining Hall in a dashing design of Dresdenian Rococco with fluted marble ionic pilasters and gilded Persians bearing flambeaux etc.

I took the liberty of broaching your idea with my fiancee, Araminta, (your fundamental insight into the concept of a Transportable Banqueting Hall is not to be sneered at) who feels most strongly that the ambience in a socialist slave transporter would be quite wrong. The dank, dreary, cavernous metallic space would make the experience more resemble a Black Mass in a mausoleum rather than one of our fabulous and effervescent feudal feasts.

Then of course there is the most important matter of the incense to be burned during the banquet. Rather than an aged banqueting hall with mahogany wainscoting and tapestries which have been sozzled through the centuries in scents of sandalwood and frankincense - amplifying and accentuating the affect of the aromas aired at the event, one's nasal protuberance would instead be assaulted by the scents of suffering slaves - their sweat, their emotions of suffering and fear, etc.

I am sure that you can see that the whole idea - ingenious though it may be - cannot ever be put into practice. Maybe some of those dreary dictatorships might go for it. Maybe even those credulous corporate types. But for those of us who espouse the ideals of refinement and manners .....

I beg, Sir, to remain your obedient servant,

Cholmondeley
Denizen of the Dark and Dismal Deserts of Digebiti.

Ah, I see. I am from a far less noble lineage and a far more pragmatic culture. My fellow citizens and I lack the refined architectural and culinary palate of the residents of your empire (may the suns never set on it). We find a tin can to be more valuable than an heirloom bowl of fine asteroid silver, if only for the fact that we don't have to polish it.

In the same way, we don't see a derelict Commuter as a fallen symbol of oppression (though it undoubtedly is), but as an unused shell to put something in. Recently democratized systems tend to still use the aging, inefficient infrastructure of the formerly Communist state (a constant reminder of their newfound freedoms), and this is simply an opportunity to utilize something usually thrown in the scrapyard. No reason to let all that plating and life support equipment to go to waste.

It would not do, however, for an artistic, venerable culture such as yours to hold your ancient feasts in it. The ancestral halls on the surface and in your Royal Hunting Lodges are far more suited, and the atmosphere is as important as the food- presentation is everything. An unrefined tin can that smells of socialism, no matter how well-decorated, is simply unacceptable.

Now, if you'll pardon me, I need to make some calls. I know a fellow who knows a fellow that runs a scrapyard in Tibionis...
Top

I've only just scrolled back and seen your post of May 7th.

Very imaginative! I much prefer your interpretation of the Astrogulag to the original - and your SLAPU looks quite intriguing.

What is HUD that you display in the first photograph? I don't think that I've seen it anywhere else.
Denizen of the Dark and Dismal Deserts of Digebiti.

Thank you!
I haven't had much time to work on Oolite, although I do check the forums pretty frequently.
I've made a touch of progress on the Astromine since then and will probably move on to texturing before too long. 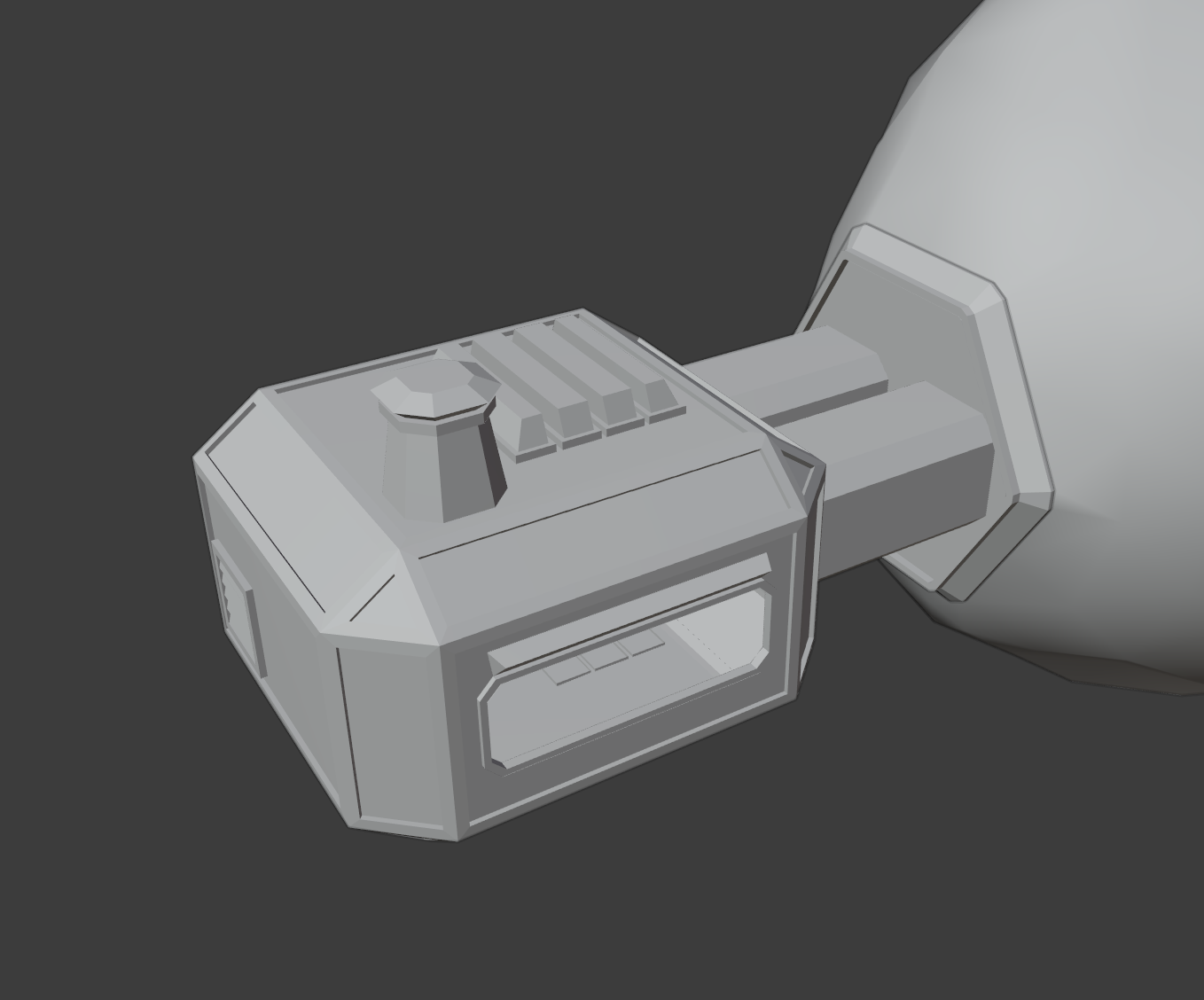 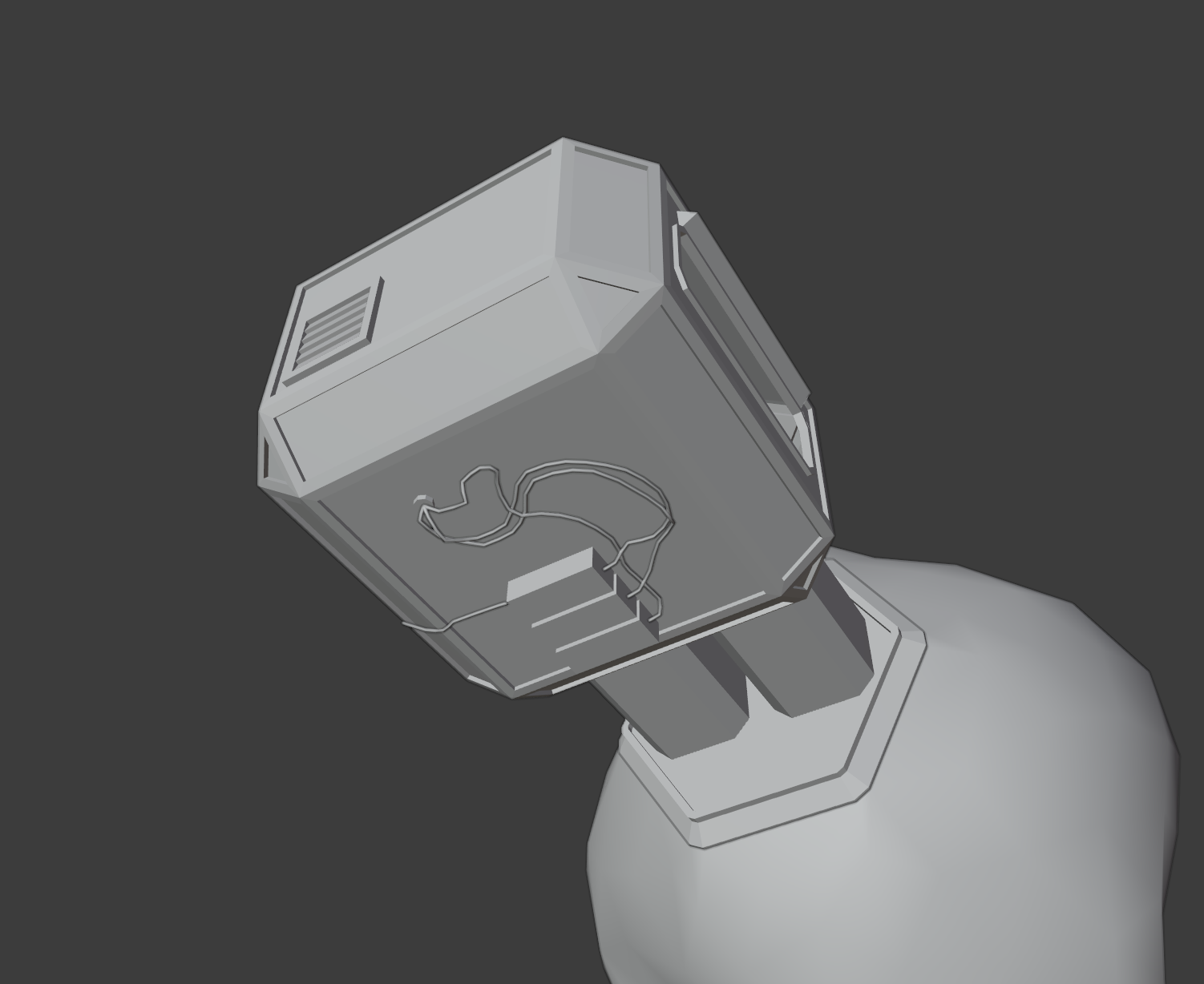 The HUD is the alpha of an idea I had to make a unique HUD for each craft, based off of gsagostinho's Dangerous HUD. Obviously (hopefully) this one is the Cobra mkIII. It's not really ready for release yet, but should have a download out eventually. 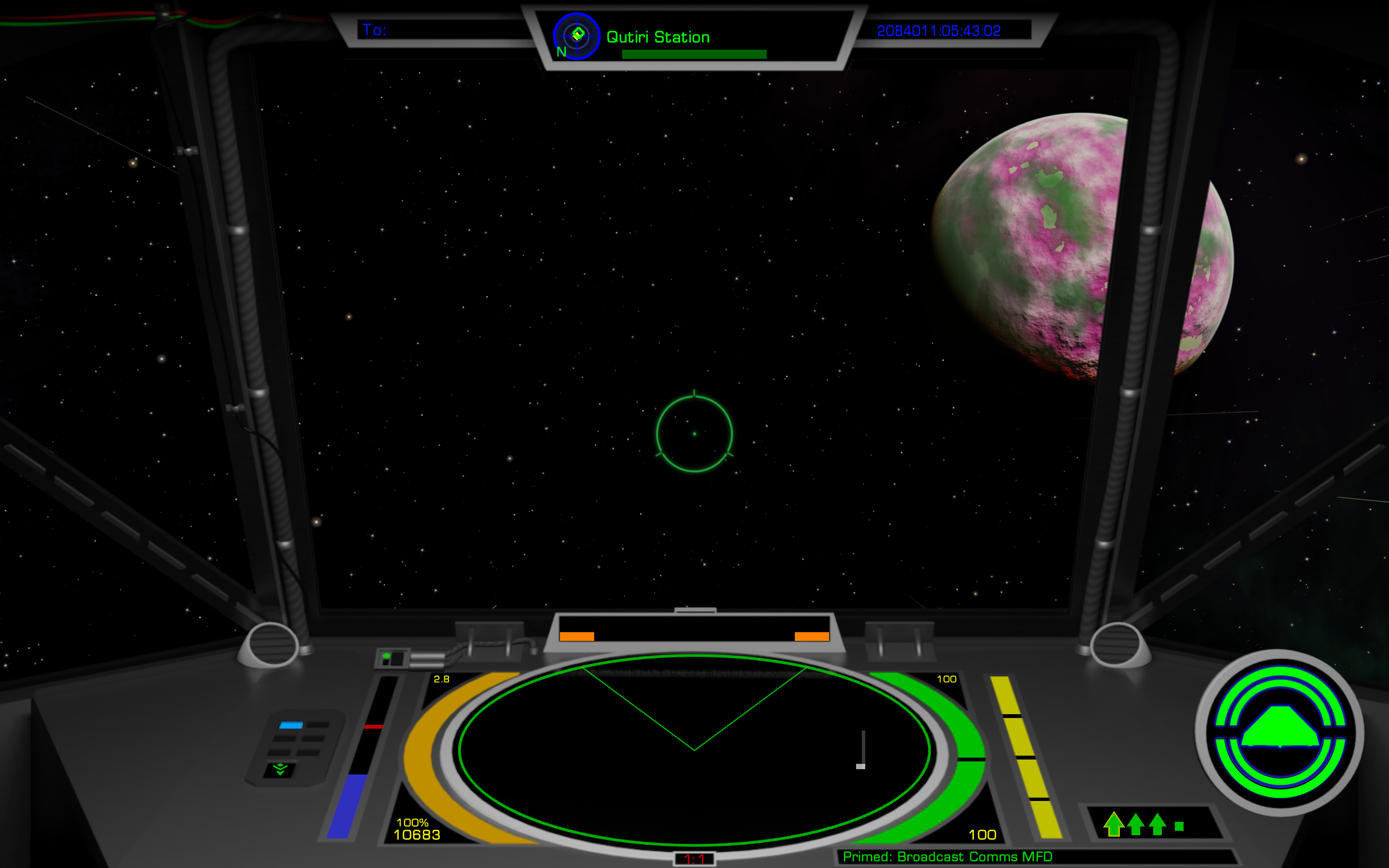 As regards your HUD, are you sure that you're not tempted to bung in some galloping goblins a la ED?

After four years absence, they send me bobbleheads? Jeez!

ED: We would like to take this opportunity to thank you for your continued support, dedication and passion for Elite Dangerous.

Cody really goes for them! You'll win him over even if no-one else shows any interest!

Your gulag looks very much the right sort of thing.
Denizen of the Dark and Dismal Deserts of Digebiti.