and the shuttles, and asteroids.. i've got a list by the computer that i'm marking them off on as i go along, over halfway now! i don't think i'm going to get them all done by Christmas but i'm sure i'll have at least 2 more done by then, plus my secret oxp project to turn all the asteroids into xmas puddings

edit: oh, and the escape pod! i *think* that's all of them
Top

lfnfan wrote:
Then it's just the Asp, Gecko, Mamba and Moray until there is a glorious full house

Not forgetting the Dodo and Icosa stations. Is there a Christmas present in store, Griff?

I will even stand you some seasonal socks, if you are open to that sort of bribery...

Alas you will have to add the Boa to the above list, done in the 'new old' riveted cast iron style.

by the way, your 'new old' style is pretty much how my brain told my eyes to see the wire frame ships on my BBC Model B Elite all those years ago....
Top

lfnfan wrote:
by the way, your 'new old' style is pretty much how my brain told my eyes to see the wire frame ships on my BBC Model B Elite all those years ago....

Right On Commander. It was exactly the same for me.
Knowledge is a deadly friend, if no-one sets the rules
The fate of all mankind, I see, is in the hands of fools

@ Griff: you have a list that you are working through. That's all I needed to hear. I can console myself with the knowledge that good things will come to those who wait

...congratulations. Those are excellent. Absolutely stunning.

Any chance of some nice hi-res shots of the things? I'm interested in making some wallpapers of your ships, but I need at least, oh, I dunno, as big as you can get. I'd love a hi-res of the Boa; that thing's phenomenal.

lex_talionis wrote:Any chance of some nice hi-res shots of the things? I'm interested in making some wallpapers of your ships, but I need at least, oh, I dunno, as big as you can get. I'd love a hi-res of the Boa; that thing's phenomenal.

Your wish is my time-travelling command. Well, almost; these are pre-normal mapping: 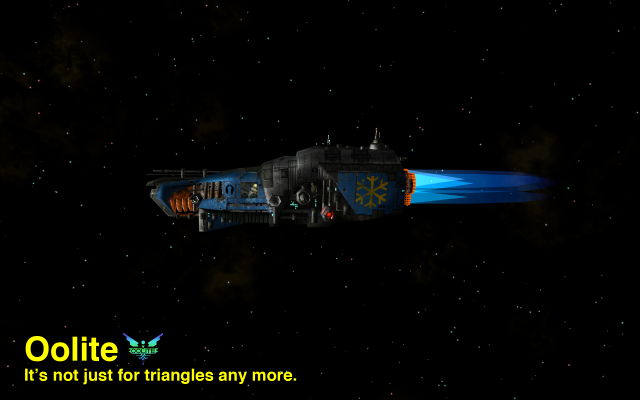 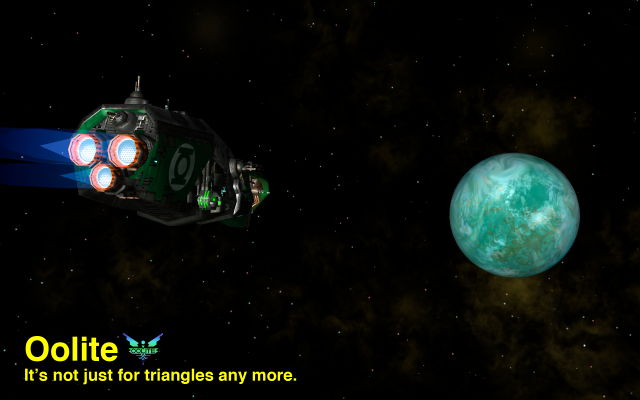 commander... how did you get so many jpg artifacts in those?

Looking at those images made me wonder: is there any way to get pictures of the crafts not in game? Can one export hi-res images from whatever modeller/renderer you're using?
edible poet? onna stick?
Top

You could export them yourself! there's a .dat to .obj exporter, and .obj should be readable by the vast majority of modelling software.

It does import ok to both wings3d & blender, in any case...

My Mac's gone on... holiday. To Reinstall land, but, unfortunately, via Can'tfindthedisks Airways, which makes things a problem.
edible poet? onna stick?
Top

Well look whos been busy... hi Griff: I was wondering what a griff sidewinder would look like just the other day.

I like many of the ideas in the new implimentations - especially allowing custom colors for player ships. May be nice to allow the player to use a custom decal too, though a choice of four is good. If the player had a config file for the color and decal and whatever else one wants to give them control over, then all player craft would be presented with the player's own livery ... helps sales. I think that should be doable, even if it involves getting a script to read a text file and write the appropriate values to the shader. Less elegantly by providing a player texture to overlay the standard one... but I think you've used up the texture allotment.

I don't think these ships and the neolite core ships go together very well... obvious if you compare the anacondas. This does not have to be a bad thing... but I can speak from experience that the task of producing a consistent-themed ooniverse is bigger than it looks.

I have been speculating on creating griff-esque craft to supplement your set... that may help speed things up somewhat. Iwas going to pick one of the shader sets from one of the ship packs - perhaps the cobra 3 one - but you may have a better idea.

I actually tried this before starting on neolite, but was thwarted because I was totally hopeless at reading the shaders. Everything was very experimental then, but seems you've established some sort of standard to work to.

I figure I could make a simple model + textures, including the normal etc maps, then just send you the greyscale layers I used so your can tweak them ... should save a lot of time no?
Simon Bridge
[re2dux] [neolite]
"Everything is perfect down to every last flaw..."
HBT: The Book of Verse - Principia Discordia
Top

Lessee - the fighters Griff has not done yet - Gecko and Mamba - how about:

Note: you have to try to picture these with a griff-style skin+shaders.

1. the engine is too detailed - need to shift some of the structure to the normalmap.

2. Mamba should have a simpler body - I think the top should be closer to the classic lines and the normalmap used to break it up a la Sidewinder. The square on top should be narrower - but remember, this part gets plastered with dents and ridges via shaders to make a sensor cluster.

3. From the models - gecko should be faster than the mamba ...or have more spare energy for better sheilds etc.

4. Forgot the gun on the gecko - mamba gun is indicative only, I'd want to use one of griffs fighter guns for this.

I didn't skin these because (a) Griff can still tell me to sod off :) and (b) I'm still transferring my oolite toolkit from my damaged machine.

So - is this sort of thing useful or should I just go and stick my nose someplace else?
Simon Bridge
[re2dux] [neolite]
"Everything is perfect down to every last flaw..."
HBT: The Book of Verse - Principia Discordia
Top

Wow Simon, those are much better than i was going to do! I love the detailed engines, i really wouldn't change them, normal maps are great for a lot of stuff, but it's also really great to have proper geometry in there too, and since as players were usually spend a lot of time looking at the back of npc ships trying to get them in our gunsights it's great to have some eyecandy there.

could you do a fer-de-lance like your new gecko & Mamba Simon? the one i made i really don't like but i've attempted it 3 times now and i don't think i'm going to get anything better made

Here's a 'Moray' design i'm picking away at

I thought i'd try and texture it a bit 'submarine' like, with port holes and stuff along that spine thing on the top. The 'Dark Wheel' mentions the Moray having lots of lights running along it, i imagine this looking like those deep sea jelly fish and whatnot, if i can manage it, i'll give this ship a shine like the viper, with maybe a bit of thargoid fresnel and lots of freaky thargoid running lights - what i am excited about trying to do is to make the 'hostile mode' really exciting to see, pulsing red lights and lots of flickery/fizzing electricity stuff running over the hull - hopefully Ahrumans active camo shader will work for this but i really wanted to save that for the griff_constrictor so i don't know.

Yep, the CobraIII shader is the base shader i always start using, it's the one that has all of Ahrumans example shader effects in it and the Normal mapping, the other shaders in the griff ships are variations of it really - the viper shader has a fake 'reflection map' effect in it, the thargoid shader has a that also plus a 'fresnel' effect, the anaconda shader is the cobraIII shader but with a bit of code to allow the placement of more than 1 decal.

There's a thread somewhere which goes though one of the shaders i've used line by line somewher on the boards, it's fairly recent too, i'll have a look through the forum to find it, they are easily adaptable to any oxp ship, but i've got a feeling that the bunging of texture maps into the alpha channel is putting people off using them, they open the textures to see what's going on and see nothing but some weird dots on a transparent surface, i should do more to document and explain them.

There's a really cool free image viewer called XnView (i think it's windows and mac only though) that's great for viewing texture with and without the alpha channel and lets you export Alphas seperately from the rgb channels too
Last edited by Griff on Wed Nov 18, 2009 9:51 am, edited 3 times in total.
Top
Post Reply
2337 posts