Updated the Griff's Normalmapped Ships (Optional overrides) OXP v0.1.1:
- Adds a materials for Griff's cargopods and Python (used in the python and python-blackdog).

Apologies a bit of a blog post, I've made a start turning the 'alternative cobra III' ship i made a while back into a medium-high poly version, just done the back and the side of the ship at the moment, have managed to make lots of polygon tangles that will need sorting out as usual.

I've never attempted the workflow before, but the plan is to 'bake' down a lot of the detail in this model to a lower poly version normal map for use in-game, and also attempt a new PBR version to take advantage of Oolite's amazing new shading capability, hoping to try and use 'substance painter' to help with that, i think it has a spec/gloss workflow, I've never really used the program but i picked it up ages ago in a 'Steam' Christmas sale and want to try and get some use out of it

Hope everyone's doing OK and keeping safe, I've not been away from the forums, always lurking but don't really have anything to contribute, and the trivia question thread are way to hard

WIP render: (photobucket went really expensive so i had to close my account with them, hope this works: 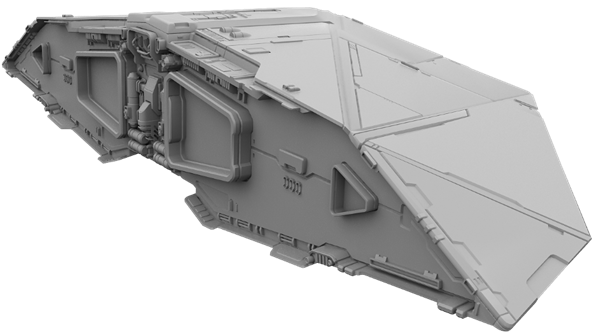 This is gorgeous. Seriously. Can't wait to see it in-game.
Top

Lovely! Great news, Griff - will it still allow decals?
A squid eating dough in a polyethylene bag is fast and bulbous! Got me?
Top

yep will definitely work to make this as easily modifiable as possible, there's some amazing paint scheme designers an artists here i'm hoping will be able to work their magic on it.
I've been tinkering on bringing the new lighting code from Oolite into the shader i was using for the 'normal mapped shipset' it's kind of working - decals and engine glows are in there but it makes everything go blue in Rendermonkey though at the moment, think it's because it uses some openGL variables that will have a value set to them in game but rendermonkey doesn't set them up with anything sensible
Wiki homepage for my OXP: http://wiki.alioth.net/index.php/Griff_Industries
Top

Good - Spindrifter (my alt-Cobra in distressed chrome) was needing a revamp.
A squid eating dough in a polyethylene bag is fast and bulbous! Got me?
Top

I'm pretty sure with the new pbr code in oolite we'll be able to give it a proper chrome surface now too (might be slightly blue though if i can't fix my bugs)
Wiki homepage for my OXP: http://wiki.alioth.net/index.php/Griff_Industries
Top

Griff wrote: ↑
Mon May 11, 2020 11:05 am
I'm pretty sure with the new pbr code in oolite we'll be able to give it a proper chrome surface now too (might be slightly blue though if i can't fix my bugs)

Sorry to have to disappoint, but I think that for a fully realistic chrome material we need environment mapping, which unfortunately we don't have at this time. Chrome must reflect almost nearly perfectly everything that is around it and we need some game engine updates to get that. We can get close, but without the environment reflections.
Top

Griff wrote: ↑
Mon May 11, 2020 10:31 am
Apologies a bit of a blog post, I've made a start turning the 'alternative cobra III' ship i made a while back into a medium-high poly version, just done the back and the side of the ship at the moment

Looks great as usual Griff. I much prefer this version of the mk 3.
Splendid

Total bane of my early models

and why they never made it into the game.
"With our thoughts, we make the world"

Here's hoping for the same 4 engine trails too, if not too much to ask

On the technical side of the things, though, while I understand the usefulness of "Substance Painter", are you using RenderMonkey to test your shaders directly as they would look in-game (i.e. for a sort of carbon-copy from RenderMonkey to you OXP) or just for visualization? Although even on the texturing side I'm an only Blender person, I've seen a lot of people using Substance Painter and Blender in their pipeline (at least for PBR rendering - and Blender's new Eevee is fast and real time with that).
Top

I'm hoping Substance Painter is going to really drastically speed up the texturing, with a bit of time i'm hoping that i'll eventually build up a 'library' of various types of surface that can then just be dropped onto sections of the model and have substance painter generate the various colour and spec/gloss maps for me automatically for use in Oolite, i think it'll also allow me to paint directly onto the model in a 3D view rather then having to switch to a 2D art package and draw on a flat 'UV map' version of the texture then have to toggle back into the 3D program to see what it looks like or if the newly drawn bits line up with the rest properly (wonky hull plate lines)

Rendermonkey is ancient and out of support by AMD but it's perfect for Oolite, but it's great for 'final tweaking' the effects maps - i can run the exact shader code in rendermonkey that Oolite will be using so any syntax errors or bugs will show up instantly in Rendermonkey with just a quick click of the 'refresh shader' button, so i don't have to load the ship into Oolite and check it there to see how it looks or read through the latest.log file for shader errors.

Rendermonky is also great for placing decals or for real time checking of specular map intensity levels, you can also change the values of the various shader uniforms too whilst the code runs on your model in the preview window, so you can see how glow maps will ramp up in intensity when they're being driven by for example, the current ship engine speed back in Oolite or the hull temperature or something

Blender looks amazing, i'm too old to try and pick up another 3D package but it looks so brilliant and fun to use
Wiki homepage for my OXP: http://wiki.alioth.net/index.php/Griff_Industries
Top

As a Blender advocate (

), I think it is worthwhile to mention here that there is 3D texture painting available in Blender.

As per the RenderMonkey habits, I recall I tried it sometimes back, but it seemed to me too convoluted for just doing some simple GLSL tests. Blender was an easier approach at that time, but unfortunately, since its Game Engine removal in 2.8x versions, manual GLSLing is no more available, although Eevee (the new viewport real time engine) is a renderer based on GLSL shaders.
Top
Post Reply
2337 posts