An area for discussing new ideas and additions to Oolite.

Lestradae wrote:So, any chance of this making its way into trunk in the foreseeable future then?

Not yet - and I've been tinkering for a while. I think the approach is right - but the coordinate space it's being applied in is wrong. The geometry is doing my head in.

Have you considered collaborating with kanthoney? Judging by the way he was able to sort out the sharp terminator problems, he seems to have some grasp of that kind of stuff.. another pair of eyeballs might be helpful.
Most games have some sort of paddling-pool-and-water-wings beginning to ease you in: Oolite takes the rather more Darwinian approach of heaving you straight into the ocean, often with a brick or two in your pockets for luck. ~ Disembodied
Top

I'm comfortable with matrix transforms and maths and stuff, but not that familiar with OpenGL (yet).

What I did find when digging through the planet shader thing was that a startling amount of Oolite's OpenGL code is using techniques that have been depreciated. This shouldn't matter, in theory, because OpenGL is supposed to remain backwards compatible so you can use old techniques, but the planet shader was one case where it did matter: back in days of yore, OpenGL used to work out a matrix called gl_NormalMatrix for you. This feature got depreciated - you're now supposed to work it out yourself and pass it through to the shader, I think - so some graphics cards don't bother, even if you're using compatibilty mode. The knock on effect of this was the crappy terminator. I accidentally found a bodge which changed the problem to one that's less obvious - it's now just ignoring the normal mapping of the texture instead on affected cards.

So, we could probably do with an overhaul of the OpenGL code in Oolite. The problems are 1) there's a lot of OpenGL code in Oolite and I, for one, wouldn't know where to start; and 2) if you did update it all, you'd presumably break all the third party shaders and stuff.
Top

Part of it is that our official OpenGL target is 1.1: the code should run on any card which supports that level, though if there was something put in which broke that, I'm not sure we'd notice. Judging by the responses to the graphics survey, we could probably safely go to 1.3 (cube map texture support) or maybe even 1.4, but we definitely still have players on 1.4-level graphics cards.

Provided you check for the necessary OpenGL extension or version before doing things, though - and have a fallback if it's not available - you can use even OpenGL 4 features if you want. For optional effects, you could put in a new graphics quality level which required OpenGL 3 or 4, and make sure the maximum was set properly (as it is now where the shader options just don't appear if you have a 1.x card)
OXPs:

Curse of the Black Sunspot, and more
Top 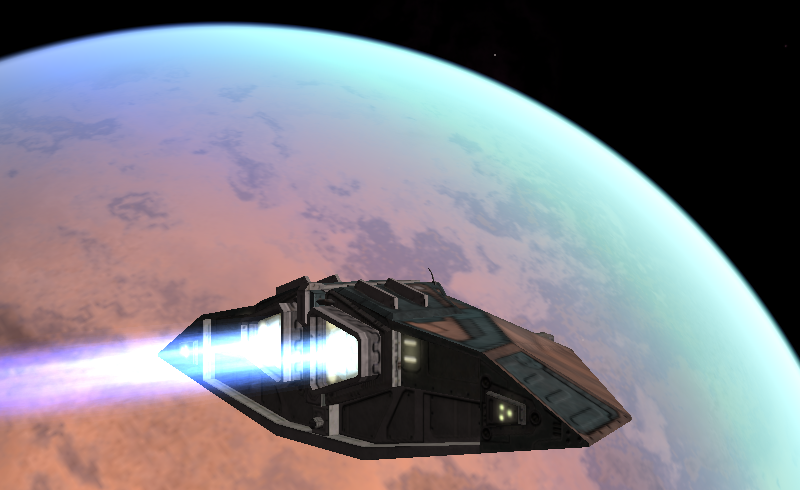 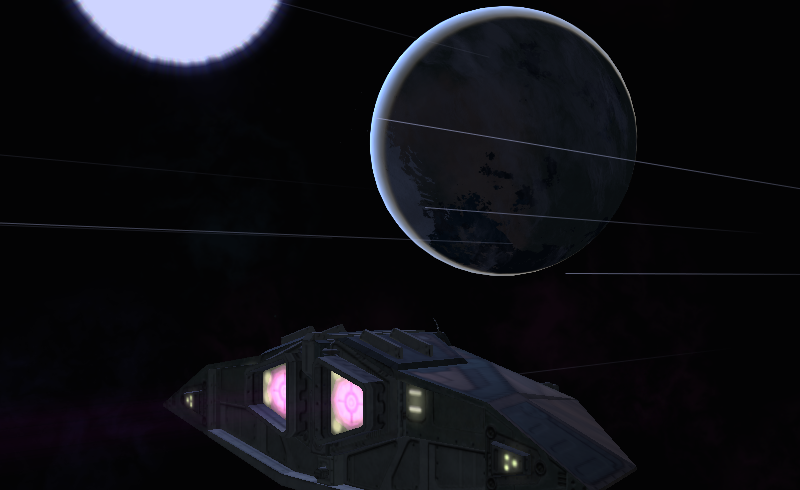 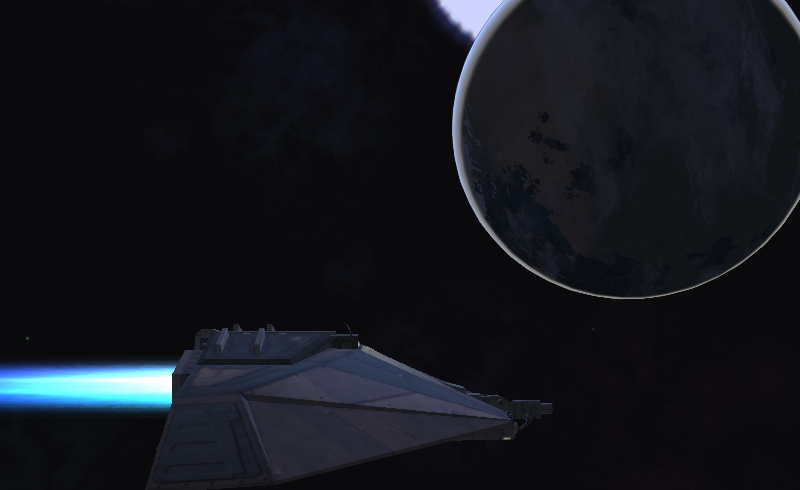 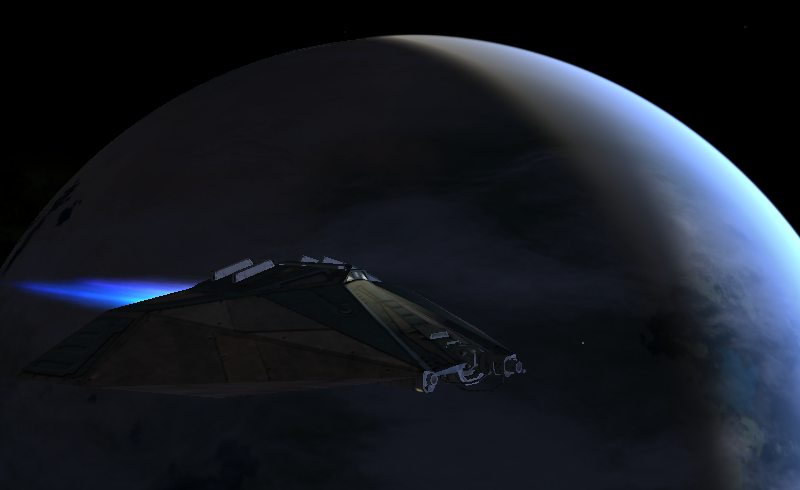 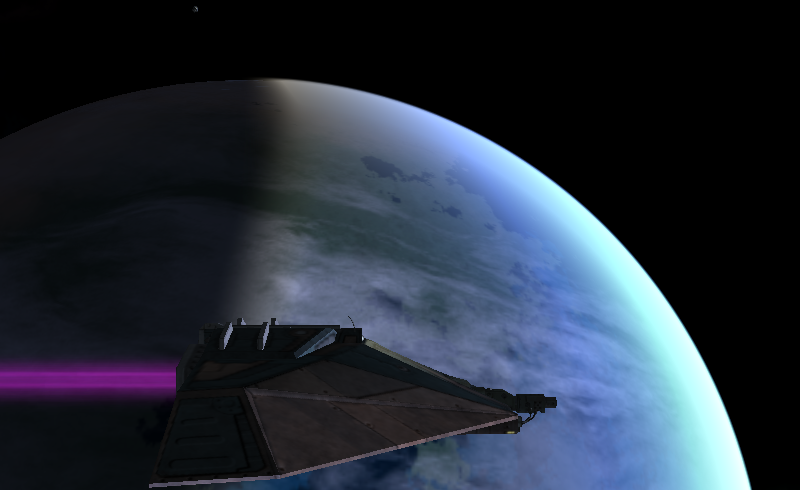 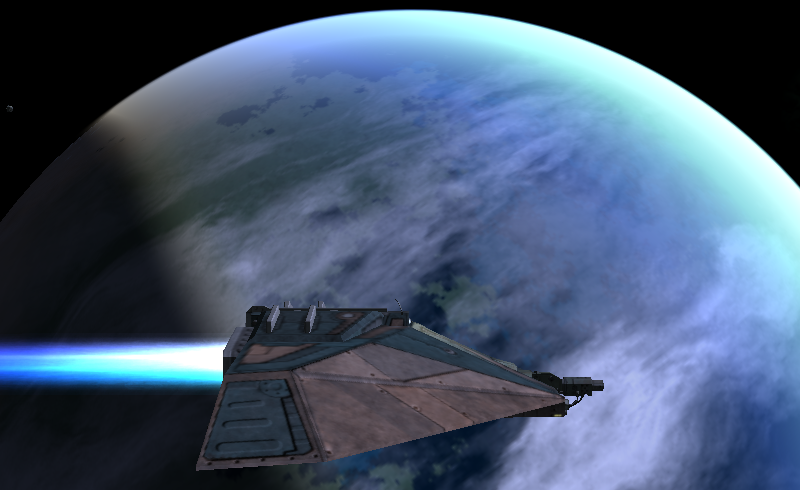 This is amazing! You're putting Povray out of use, submersible!
Top

Absolutely magnificent. When is this in the trunk?

From the right angles - it looks really good. Still making a lot of compromises. This for example sacrifices the clouds entirely. I'm considering an extra pass in additive blending mode so as to have both clouds and scattering effects. Oh- and this shader just cooks the GPU, my laptop cannot cope with it.

On trunk when. .. this year maybe?
Povray Planets - Planet textures for your galaxy
Top

Looking at github - I don't think shady-planets has moved along since I lost motivation and disappeared for many years. Digging through the changelog for oolite it does not seem like anything similar has landed for planets + atmosphere and material descriptions in planetinfo.plist that are like ship material dictionaries. I'm going to try merging master back into it and survey the carnage.

Would shady-planets features still be interesting to the community given the advent of reshade and the disruption of elite-dangerous ?
Povray Planets - Planet textures for your galaxy
Top

Short answer: yes!
Truth is the daughter of time...
Top

The atmospheric scattering effects we have right now are not the result of Reshade (which is Windows only btw), but new shaders that have been added relatively recently. However, the shader we use now is a good enough approximation of scattering and is very simple in its core. If I remember right, the shady planets tried to utilize physically correct calculations. So yes, it would be very interesting to see if the atmoscattering shaders can be further improved.
Top
Post Reply
162 posts