Currently I feel very much discouraged from engaging in combat. I have Military Laser and other fancy equipment and 2 (two) kills.
It never happened to me in old Elite, not even close. If I engage in combat, there is a high probability that my cargo might get destroyed.
Even some expensive equipment might get damaged. And reward is far lesser than risk. I have damaged few other ships, but got too busy
collecting containers to finish them off. I am more of money than glory type. Is my attitude wrong for this game ?
Top

Hi askfor, welcome to the boards! The first thing to check is: are you using any expansion packs with your game? They can make things a lot harder (especially if the packs were made before the AI got smarter: traditionally, the way to make challenging enemies was to make them powerful-but-dumb; then the NPC AI got boosted and they became powerful-but-smart).

If you find yourself in combat, kill - or at very least, drive off - your opponents before stopping to scoop cargo! Kill the smaller ones first: a Mamba can dish out as much damage as a Python, but it dies a lot faster. If you're taking fire, dodge and roll: once incoming shots start penetrating your shield, your cargo and equipment can easily suffer damage.
Oofiction: Calliope: a Captain Hesperus adventure | Stranglehold: a Captain Hesperus adventure | Local Midnight in the Vacuum Bar | A Farewell to Arms, Legs, etc.: the Blaze O'Glory Story
Top

I have EE unit, it helps restore shields, but does not prevent them from being penetrated.
I have problems during, what pilots call, "merge", while opponents are still far away. I'd like
to avoid frontal approach, like old flintlock pistol duelists. So, I sort of, zig-zag up and down until getting closer. However, if there are multiple opponents. and often there are, still taking too much fire.

On the other hand, avoiding combat is rather easy. Turn tail. quickly place opponents directly behind, full seed and fire a missile on closest hostile. Jump away when not locked any more. Generally, much more cost effective. Unless there is some very fat opponents, works.

I am trying to play as if I was really there.
Top

Disembodied wrote: kill - or at very least, drive off - your opponents before stopping to scoop cargo

This. Definitely make sure you're clear of enemies before scooping anything. Lining something up to scoop, then flying in a straight enough line to finish the job makes you a sitting duck of a target.


askfor wrote: Currently I feel very much discouraged from engaging in combat. I have Military Laser and other fancy equipment and 2 (two) kills.

Are you using keyboard/mouse or a joystick. I'm pretty hopeless with keyboard combat, but can take on a dozen with my gamepad.

askfor wrote:So, I sort of, zig-zag up and down until getting closer.

I find a spiral-type approach works well for throwing off their aim until I get close. The gamepad helps here as it's easier to put the ship into a spiral maneuver that still moves towards the enemy group. My preferred combat is all close in (although I might snipe a couple of ships long range if the group is big), but the worst scenario is where there are two different groups of enemies on different sides of my scanner. That means I can only get close to one group, while the other gets to shoot at me long-range which can be quite devastating when you're on the 6 of another ship and lining them up for a kill.

Can I also recommend checking out the wiki page on

combat tactics? It's a collection of a lot of combat advice given to pilots over the years and might have something useful for you.

askfor wrote: ↑Mon Aug 06, 2018 4:52 pm Currently I feel very much discouraged from engaging in combat. I have Military Laser and other fancy equipment and 2 (two) kills.
It never happened to me in old Elite, not even close. If I engage in combat, there is a high probability that my cargo might get destroyed.
Even some expensive equipment might get damaged. And reward is far lesser than risk. I have damaged few other ships, but got too busy
collecting containers to finish them off. I am more of money than glory type. Is my attitude wrong for this game ?


The original Elite, as I have tried to show before was considerably easier than oolite, and much faster gameplay wise too.

In elite you had to get to energy low before things started being destroyed, in oolite you can lose cargo ar have things damaged once your shields are down.

In terms of your attitude, stick with it: oolite requires considerably more patience (certainly initially) than the original elite but the rewards are much greater IMHO with a richer and deeper game experience. I expect you'll find it much more rewarding with a little more practice.

In any case, welcome

Good timing with this question

. We have just made a "combat school" video with Getafix, showing how to use some tactics that might help you when going against all odds. Click on the image below for video. Combat starts at 02:21. 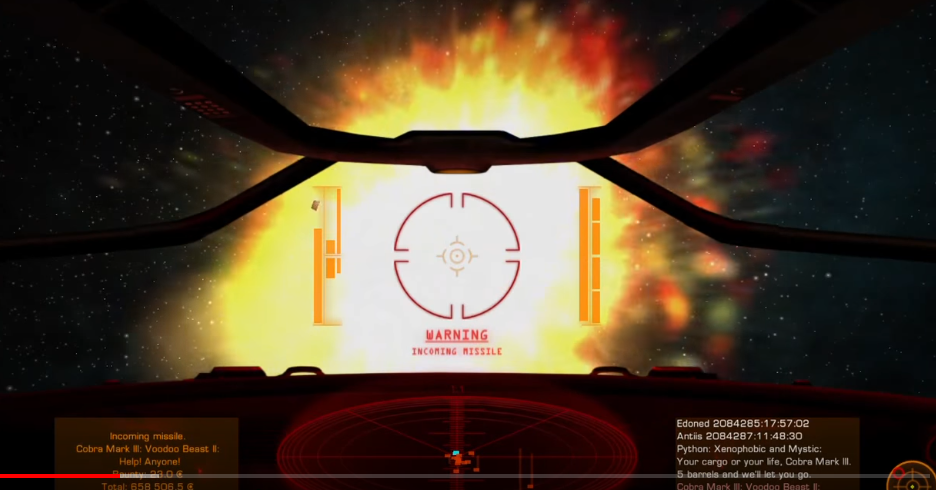 Basically, the tip is: Move all the time. Never stop. Pick the easy targets first. They die quickly but their lasers are just as harmful as everyone else's. Also, phkb's wiki link is a goldmine of information; use it.
Top

The wiki link above is blank: the link should be

I'd say that running away is, generally, much easier than in Elite. In Elite it rarely worked, now I can pass through anarchy system without firing a shot with some tactics used.

Also, Python, Boa and Boa Cruiser are much tougher. One should think twice before attacking lone ship. It requires fast "passes". Getting closer, but not much closer, firing few shots, then running away and repeating.

I've seen there are some RPG attempts, but nothing seems to be complete yet. Oolite could be a nice platform for epic space RPG. Something like
your ship has been provided by the planet with dying ecosystem. You must find device "x","y" and "z" to fix it and work with different factions to get them.
Of course, factions are at war with each other and would hold against you if you work with others.
Top

I would say that it pays to learn about opposing ships and their armaments so that you can learn which ships to be wary of and what an opposing ships most dangerous factors are.
Some ships carry only a laser at the front (or fore) mounted lasers, the krait is one such example and can inflict considerable damage when chasing you or when head on with you. One tactic I use is to fuel inject towards them until I just pass and then release fuel inject and turn 180 degrees so that you ar following immediately behind. This tactic of injecting has 2 benefits, the first being that you limit the amount of time that you are exposed to enemy fire (and make yourself harder to hit as you are travelling at high speed). The second being that once you turn 180 degrees, you are now behind the ship (which in this case has no rear facing laser) making it much easier to set about blasting away at the enemy (providing of course that you don't allow it to turn around).
Secondly know your strengths in relation to your opponent. You mentioned that you have military lasers, these have an effective range of 30km (which for me is a bit much as scanner range is only just over 25k), most ships carry beam type weapons which have only half the range. Use these factors in your favour, if I am being chased by a large pack of pirates I will turn and travel away from them, picking them off one by one with my rear laser whilst ensuring that I keep a distance of at least 16k between me and the nearest pirate. Using this technique I will take out most of the enemy using my rear laser only and will only turn and travel towards them using my fore laser when only one or two remain.
I use this same tactic with Thargoid Warships except that in this case I do not turn until all Thargoid Warships are destroyed and only inactive robot fighters remain (for me to scoop and collect), using this tactic with Thargoids (and some other foes that are faster than you) requires that you periodically have to briefly fuel inject away in order to maintain safe distance.
On the subject of cargo I use Cargo Shepherd oxp http://wiki.alioth.net/index.php/Cargo_Shepherd_OXP which for me as both a miner and scavenger is invaluable, you just need to be aware that the shepherd only draws cargo and splinters within scanner range close to it, it will not stop any nearby ships from scooping them.
O.C.T.D (Oolite Crash Test Dummy) Hmm Hmm Hmm Hmm......
Top

I have only Mining Laser in aft mount, but, after your post, I am going to place Military Laser there and move Mining Laser to right or left mount.

However, question stands. What incentive one has to increase his/her own rating ? I might want to attack large trader ships for their cargo,
but why would I want to become dangerous, for example. It appealed to me when I was young. That is why I mentioned RPG. Aome long term goal,
a quest.
Top

The main incentive would be bragging rights, I suppose - but the player's Elite ranking also counts towards hostile ships' calculations when deciding whether or not to attack you. Someone with a low Elite ranking might get picked on more often.

I am familiar with Javascript and modding, in general. I've done some Fallout 3 and Fallout NV mods on Nexus. Look for Askfor, if interested.
Among those is the alternative main quest for Fallout 3, which is quite popular, given then fact that it was released after Fallout 4.
I can't promise anything, but I'll see what can I do.
Top

I personally have feelings that combat in Oolite 1.77 was more easy than in original Elite. 15+ kills per sortie was not unusual. Since 1.80 we have more smart AI with increased accuracy. And numerous mods of course such Skilled NPCs, boosting AI combat skills.
Try to think in terms of real engagement. Evaluate danger. Plan attack. Break engagement before your shields will gone or if you feel enemy is too strong. And the last but not the least. Avoid predictable flight.
Sharp turns are good to dodge aimed shoots. Cylindrical spiral (barrel) is very useful offensive and defensive maneuver, especially if you have no fuel injector and chased.
There are three basic tactics in combat. Sniping from long range, dogfight and escape run. I use all. Fire from distance, close, go to enemy's six o'clock and have it. Or run if you enemy is too strong. Discretion is a best part of valor